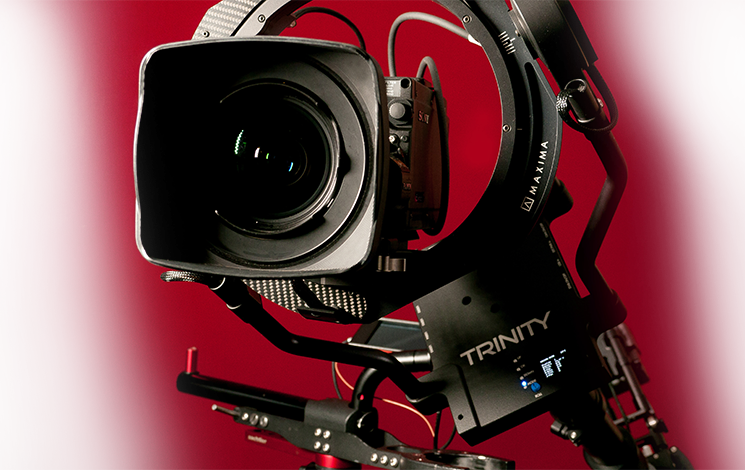 This page will introduce you to Dominic and the revolutionary Arri Trinity Steadicam.

Dominic Jackson operates both camera and Steadicam on a variety of film and television productions for a multitude of production companies throughout the UK, as well as worldwide. He is as at home on a feature film as he is on live Television, and continues to deliver the very best in creative shot development and operation of the Steadicam and Steadicam Trinity.

The Steadicam Trinity is the brainchild of Curt Schaller and was initially based upon the FoMa Maxima. The Steadicam Trinity offers three axis stabilisation enabling shots that were originally never thought possible. Unlike other stabilised heads, the Steadicam Trinity offers the ability to push through small areas on a horizontal plain, enabling fluid and continuous shots through windows or small openings, as well as making seamless transitions between high and low mode in a forward motion. The stabilised head means horizon issues are a thing of the past, even in the most treacherous of conditions.

A client commented recently ” the next thing you will be saying, is that it can shoot around corners”, in fact it can…

Feel free look around the site and do not hesitate to contact Dominic with any questions you may have.

Below is just a selection of the Steadicam credits I have worked on over the past few months, for various television dramas, commercials, documentary and live TV broadcast. Please see my credits page for a full list.

I have a full catalogue of broadcast equipment available for dry hire. Below is a small list but feel free to see the equipment page for a full list of camera, steadicam and wireless RF dry hire rentals.

Working on productions worldwide for the following

What the filmmakers make of the Trinity.

The Trinity enables film makers to move the camera in a way never thought possible!